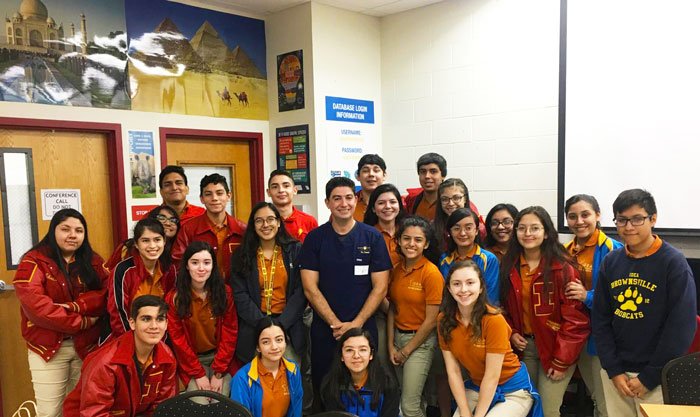 Thirty of IDEA Frontier Brownsville’s most talented sophomores are bound in for University of California, LA in July to participate in the annual and transformative LEAP Week. This extraordinary opportunity immerses students in an advanced academic curriculum, meetings with all-star public speakers and grants them valuable tools that will push them to become the invaluable leaders of tomorrow.

Brimming with eagerness to meet groundbreaking speakers and pave a road to success, IDEA Frontier Brownsville students gathered together along with their sponsor, Rodeo Dental’s Co-founder, Dr. Zarrabi and his team to be congratulated before their trip to this life-changing event. New LEAP hopefuls had the opportunity to hear from their Senior peers, who took part in UCLA’s 2018 LEAP Week. One of the Seniors present was Daniela, who spoke highly of her trip to LA back in 2018, stating, “Now I know that I am for sure prepared to take on college and that I’ll thrive being around new people.”

Daniela’s mother, Karla, praised her daughter’s growth and increased sense of responsibility after her 2018 trip, stating, “I did see a change, a big change. She was very excited about college and did see the picture, the real picture.” Karla’s son, Sebastian, will be experiencing his first plane-ride and taking part in LEAP Week this July, following in his sister’s footsteps. When asked what he expected to gain from his experience, Sebastian replied, “A good person in a community doesn’t leave because there are no opportunities, but they come back and they make [new] opportunities, so that’s what I hope to gain through this experience.” LEAP Week’s positive impact on IDEA’s students drew in the Rio Grande Valley’s Executive Director, Jill Dominguez, previously a principal at IDEA Frontier. When asked if she had noticed a change in the Seniors she once oversaw, Jill further drove LEAP’s importance, stating, “The change is significant. [LEAP Week] really helped the seniors be leaders, even on campus, this last year. That is the biggest difference we’ve seen in the kiddos. These kids will come back and be the leaders of our senior class. It helps set the culture of the whole school.”

As a token of their gratitude, the IDEA Team presented Dr. Zarrabi with a LEAP Week picture collage of the previous students he sponsored back in 2018, drawing smiles from both students and the Rodeo Team Members who attended. Humberto Valdes stressed the fact that without sponsorship, only one out of the 30 students would be able to take part in LEAP’s prestigious program as 60%-80% of the student body is in financial need.

Once the speeches came to a close, hugs were exchanged and thanks were said, Dr. Zarrabi opened the floor to all IDEA students in the room, asking the seasoned Seniors to provide insight into their experience at UCLA including their favorite speaker (favorites being Paula Abdul and Daniel Franzese from Mean Girls), what they learned during their workshops and what their first plane ride was like. New parents to LEAP sat and listened with both pride and anticipation for their children, one of these proud parents voiced hope for her young daughter, mentioning that, “She will have more opportunities to keep going forward and become someone really special. She’ll be more motivated to pursue a long-term career. She is very excited…and we will continue encouraging her to keep pressing ahead.”

As the event drew to a close, students, parents and IDEA staff mingled, brought together by the shared feeling of hope, and the promise of an incredible journey only a chosen few have the joy of experiencing. A final question was brought to Dr. Zarrabi before the group dispersed, what brought him to the path of success he experiences today? Dr. Zarrabi responded with one final statement for the juniors of IDEA, “Without a mentor…maybe I wouldn’t have ended up in the right path. When things don’t always go right how do you roll through that? How do you turn things around? That’s the kind of stuff that you’re going to learn that’s going to change and inspire you to really make the difference you want to make.” 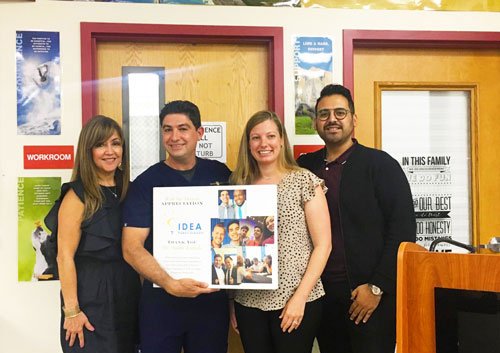 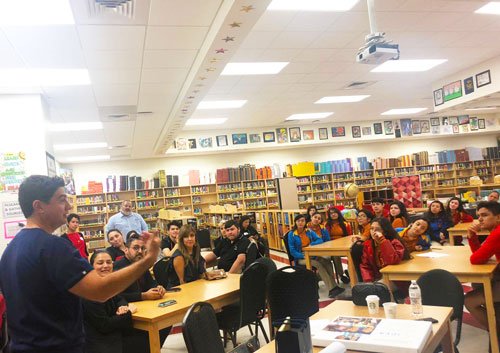 LEAP is a non-profit organization dedicated to enhancing the lives of young men and women from high school and college in order to propel them towards growth and future careers. Founded in 2008 by Dr. Bill Dorfman, the LEAP Foundation changes 400 student’s lives from 40 countries around the globe each year by funding them to attend LEAP Week, a full week dedicated to helping young adults uncover the “real-life” skills needed to achieve great success.

Rodeo Dental & Orthodontics is reinventing dentistry with its world-class service and authentic patient experience, an experience that includes 13 uniquely themed celebrations each year. Founded in 2008, Rodeo Dental continues to lead the Dental Industry with innovative dental practices by placing the patient first and has employed Award-Winning dentists from across the nation. Today Rodeo Dental continues its growth and currently has opened 20 offices throughout Texas including Brownsville with offices in Southmost, Central and Ruben Torres.